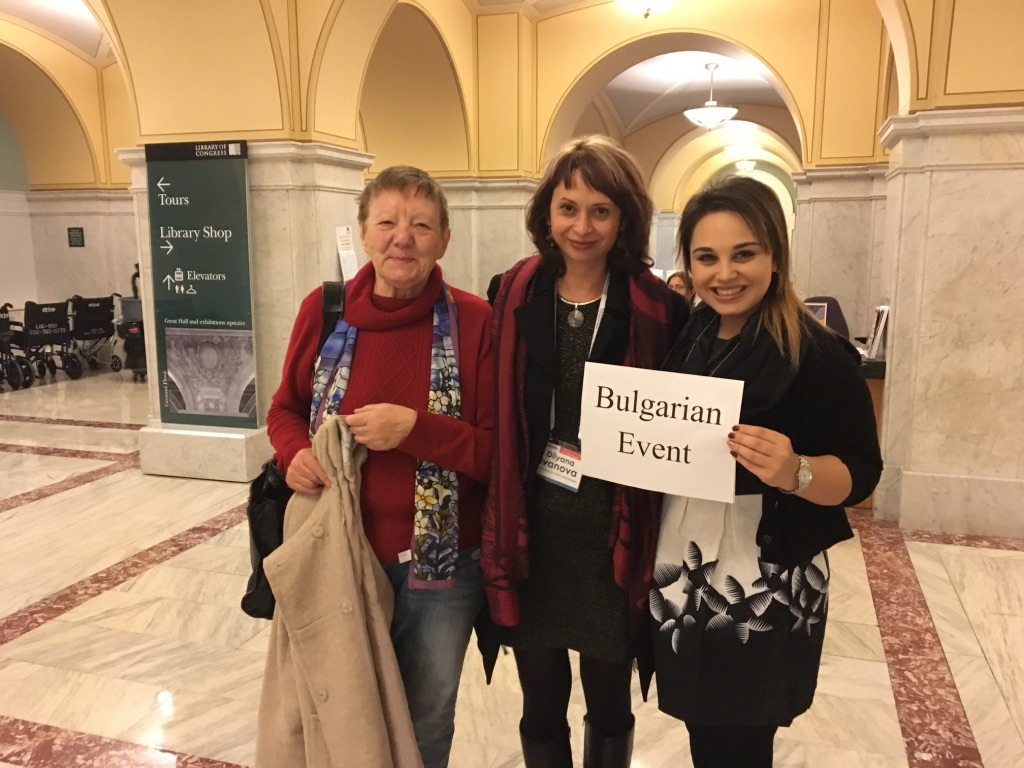 For the fourth consecutive year, the American Research Center in Sofia participated in the Annual Meeting of the Association of Slavic, East European and Eurasian Studies (ASEEES) with different activities and paper presentations. The meeting normally takes place during the second half of November. This year the convention was held in Washington, DC, between November 17 and November 21. 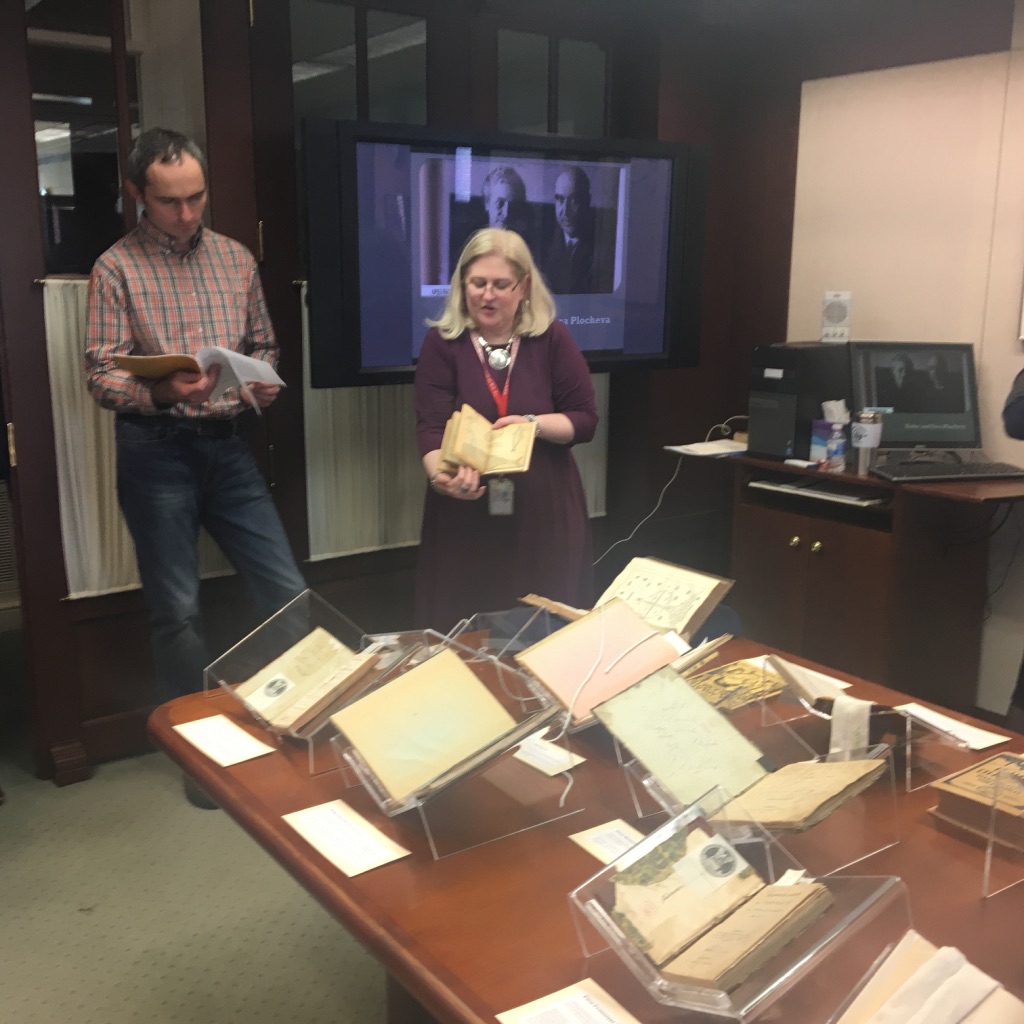 As part of the conference program, Angela Cannon, Reference Specialist in the European Division at the Library of Congress, together with the Bulgarian Studies Association, organized an exhibit of a Bulgaria Collection of rare books and archival materials. 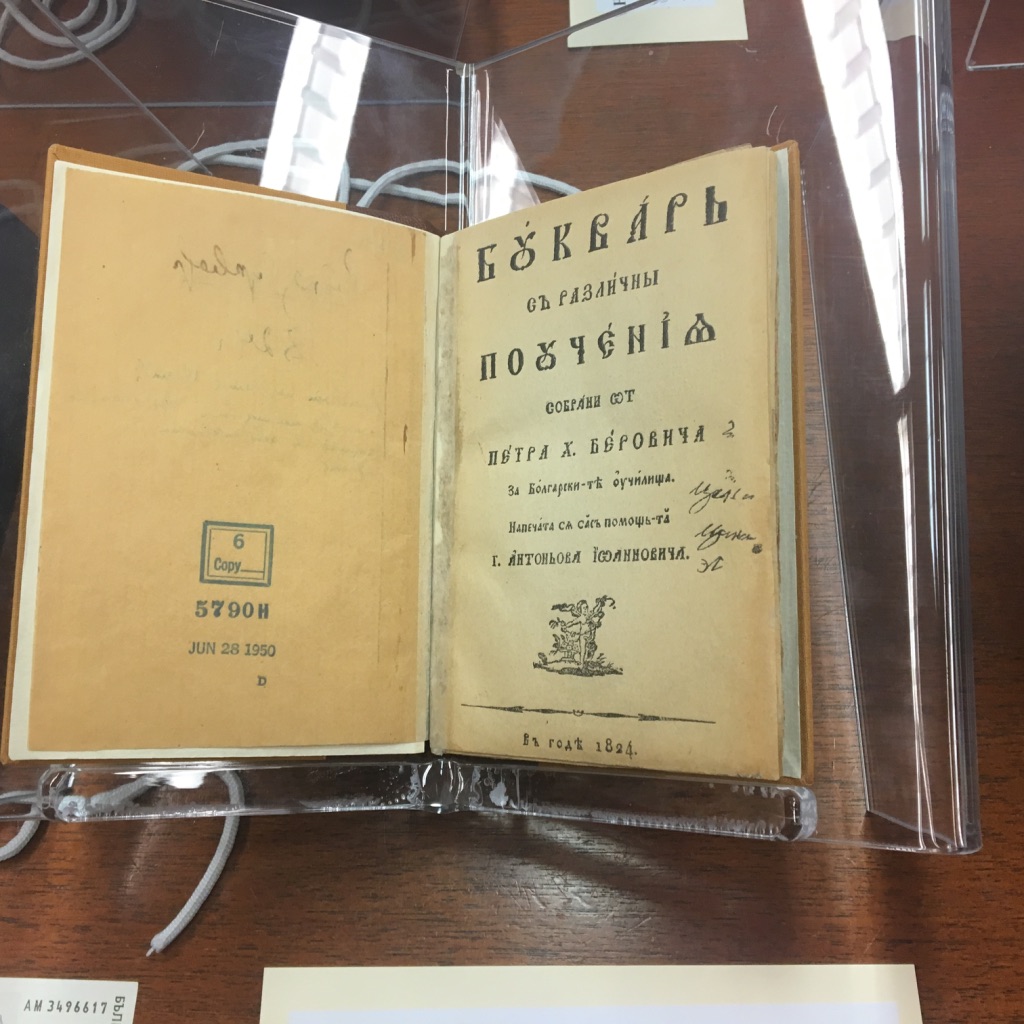 Among the books, such as Fish Primer (Рибен Буквар) by Petar Beron, Kiriakidromion (Неделник)by Sofronii Vrachanski, Haiduks by Georgi Sava Rakovski, and other precious publications from the 19th and 20th century, the exhibit displayed some of the most recent publications from ARCS.

It was an enormous honor for the ARCS team to display our books at this exhibit alongside Bulgarian historical relics such as the above-mentioned titles and other precious books about Bulgaria’s liberation from the Ottoman Empire, the National Revival Period, Bulgarian folklore culture, Bulgarian-American relations over the past 160 years, and Bulgarian immigration to the US. 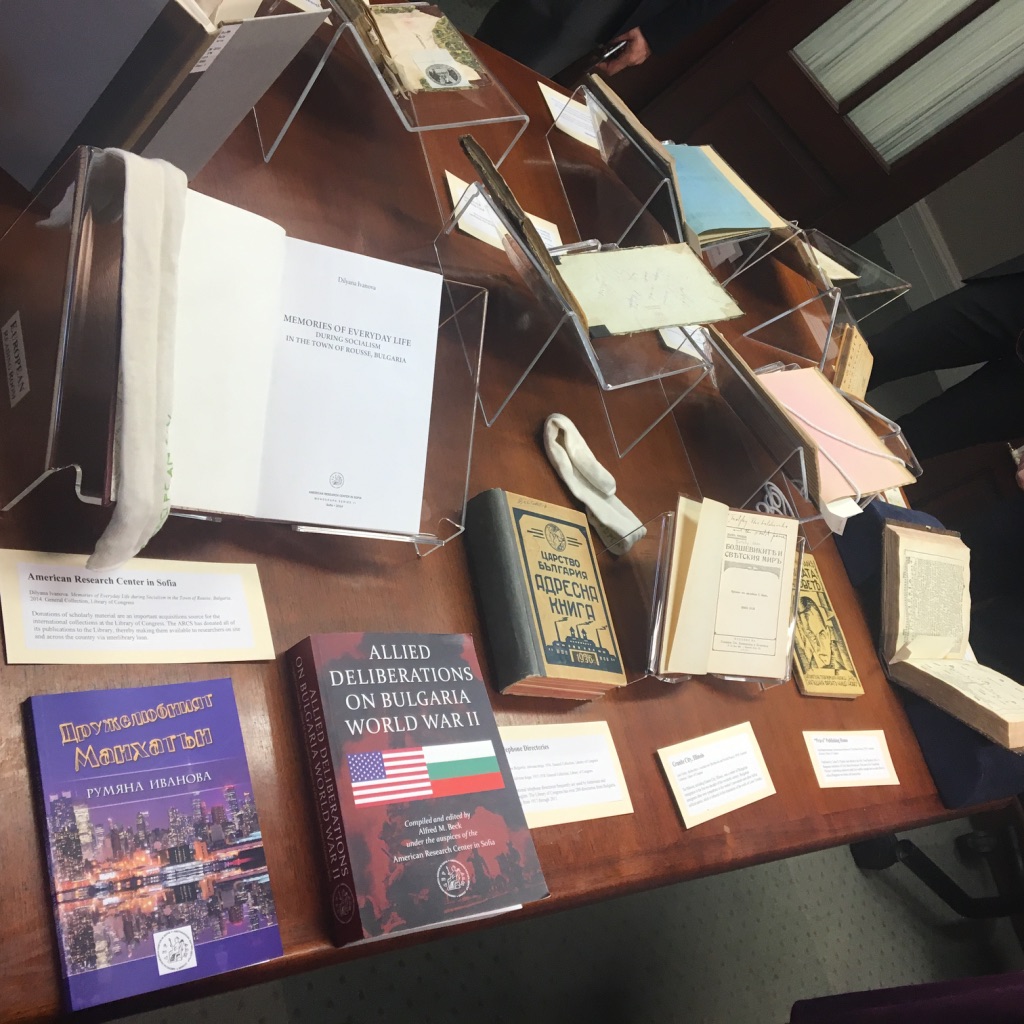 The ARCS publications presented at the exhibit included Dilyana Ivanova’s book Memories of Everyday Life during Socialism in the Town of Rousse, Bulgaria, published in 2014, and the three new publications from 2016: Allied Deliberations on Bulgaria: World War II, compiled and edited by Alfred Beck under the auspices of the American Research Center in Sofia, Revisiting the Beginning of the Bulgarian Transition 25 Years after the First UDF Government by Philip Dimitrov, and Дружелюбният Манхатън (The Friendly Manhattan) by Rumyana Ivanova.

Additional ARCS publications were displayed in the ASEEES exhibit hall, where researchers from all over the US and Europe visited the exhibit tables of universities and other academic publishing houses to view the most recent and valuable books in the field of Eastern European, Slavic, and Eurasian studies.

ARCS members also participated in the annual meeting of the Bulgarian Studies Association (BSA), which took place during the ASEEES convention. Among other important topics, the members discussed the possible venue for the next BSA conference in 2020. The conferences of this organization occur once every four years, and the last one was held in Sofia, Bulgaria, in June 2016. ARCS, which hosted a cocktail party at the event, was among the sponsors of the Sofia conference, which also included the US Embassy in Sofia and the Fulbright Commission. 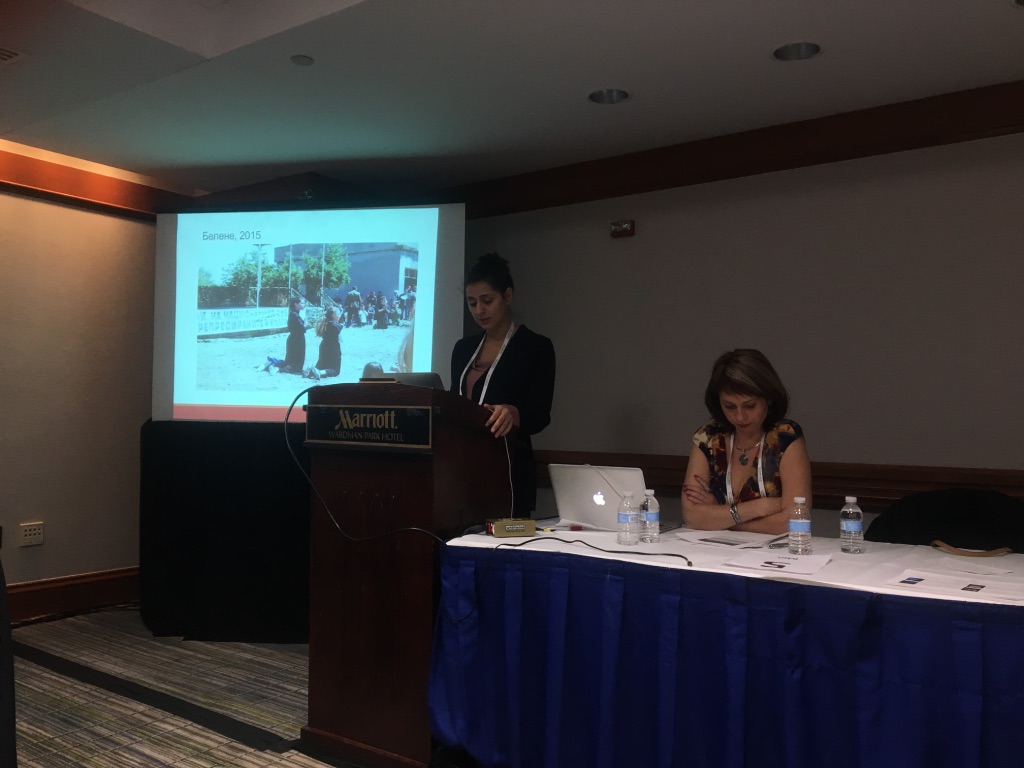 On the final day of the conference, ARCS staff members, alumni, research associates, and friends presented academic papers on the topic of communism and post-communism in Bulgaria. ARCS sponsored one of the two strictly Bulgarian panels of ARCS members and alumni. The panel’s title was “Globalization of Memory and Heritage Production in Post-Socialist Bulgaria and Bulgarian Diaspora in North America.” 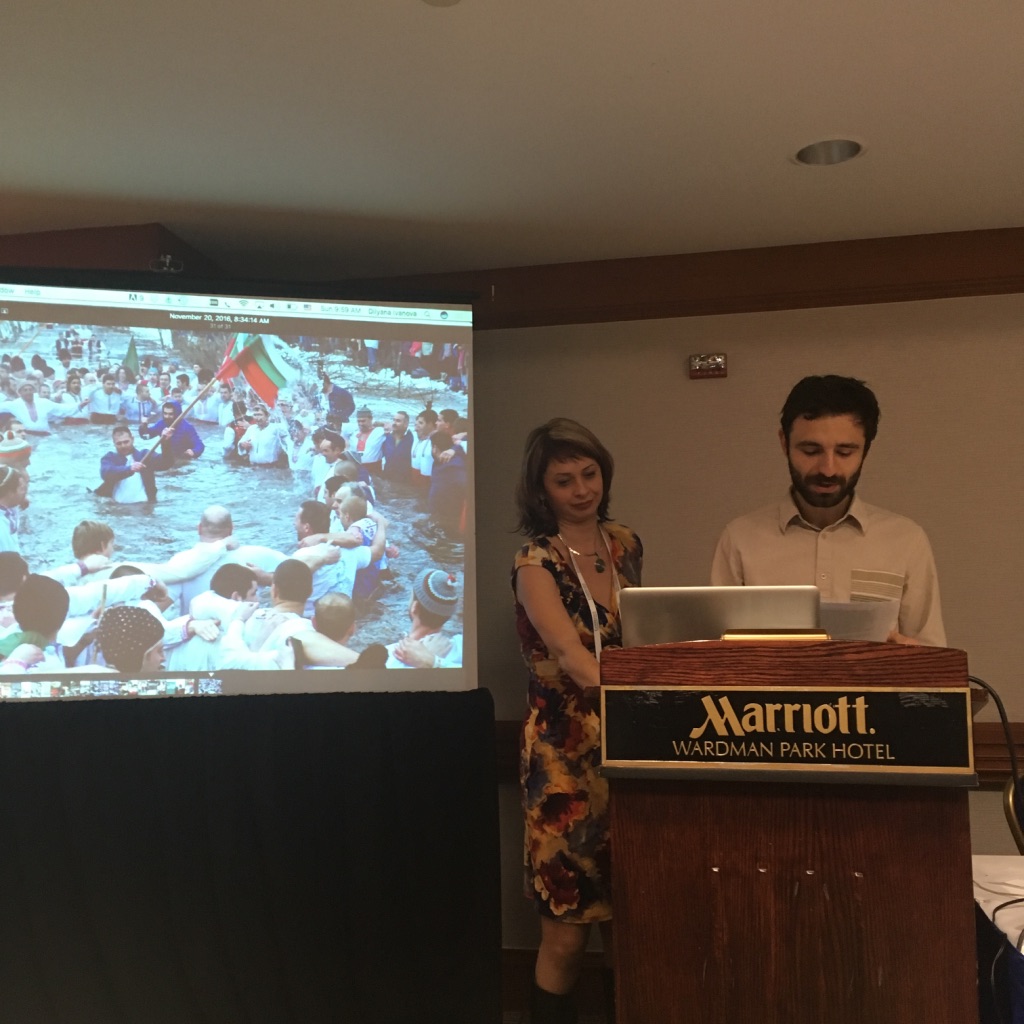 Its panelists, Prof. Nikolay Nenov, Assoc. Prof. Ana Luleva, and Dr. Dilyana Ivanova, presented three case studies on memory and heritage production in post-socialist Bulgaria, which demonstrated the close relationship between the local and the global and discussed the current local developments occurring in the European, America, and global contexts. The papers by Prof. Nenov and Assoc. Prof. Luleva, who were unable to attend the conference, were read by Julian Chehirian, ARCS research fellow and alum, and Dr. Lilia Topuzova, ARCS alum.

Mr. Chehirian and Dr. Topuzova presented their own academic papers in another panel, but they agreed to assist ARCS in conducting its Bulgarian panel by reading the papers of their colleagues. ARCS is very grateful to them for helping out at the conference!

If you would like to learn more about the papers from the ARCS Bulgarian panel, the panel abstracts are below:

The memory about Communism is still a hot topic in public debate and a part of the politics of the present in Bulgaria. This paper aims to discuss the development of memory culture about Communism as resulting from the impact of local, national and transnational (European) agents and politics.

New Local Festivities: In Search of Identity in the Global World

This text examines the revitalization of the traditional local features of regional life and their transformation into holidays through which the local communities present themselves in the field of tourism. “The Pumpkin Festival” in Sevlievo, “The Feast of Ham” in Elena, “Market” in Borovo, and “The Male Dance” in Kalofer are specific cases that illustrate the various forms of construction of the local heritage and the dialogue with the global village. Their creation and sustainability is facilitated by the media, which translated clichés of their “uniqueness.” In the last decade in Bulgaria have emerged several dozens of local festivals, such as the festival of the beans, of the mushroom, of the pie, of the fish, of the cabbage, etc. On the one hand, these festivals are produced though various European programs, and on the other hand, their appearance is a response to the blurred identity of the post-socialist society. These new local fairs in Bulgaria do not always coincide with the traditional holidays, and therefore the communities search for their own models of festivity. These models are constructed by incorporating various elements of the local heritage and by using influences from the foreign world, since the foreign tourists are the desirable audience of the events.

This paper aims to present the first-of-its-kind virtual museum of the Bulgarian migrants in North America (www.immigrant.bg), a project of the American Research Center in Sofia, and to discuss the goals and perspectives of the online museum and its role as a tool in the contemporary global conversation. The virtual museum, entitled “The Immigrant’s Suitcase,”is based on the idea of the suitcase as a metaphor for everything that an individual brings during migration, including belongings, cultural identity, and memories. It is based on an ongoing historical-anthropological study that combines research methods from the anthropology of migration and visual anthropology. This text will summarize the collected materials for the virtual museum project and the exhibited content on the website. Finally, the paper will examine how the first virtual museum of Bulgarian immigration responds to the new social necessity for advanced intercultural connections in contemporary global society, where individuals and groups relocate more intensively, and when “migration” more often becomes “mobility.”