the American Research Center in Sofia held an event at the Embassy of the Republic of Bulgaria in Washington, D.C. On December 8, 2016, the American Research Center in Sofia held an event at the Embassy of the Republic of Bulgaria in Washington, D.C. More than 40 guests attended the occasion, including numerous prominent members of American society and the Bulgarian-American immigrant community. The Ambassador of the Republic of Bulgaria, H.E. Tihomir Stoychev, delivered a cordial welcoming address and gave an illuminating overview of Bulgaria’s participation in WWII. The Ambassador congratulated ARCS and its presidents, Prof. Kevin Clinton and Dr. Nora Dimitrova Clinton, for their successful efforts to reveal unknown aspects of diplomatic history, and in particular the secret plan between the U.S. and the Allies to detach Bulgaria from the Axis in 1943—a plan that failed due to the death of Bulgaria’s Tsar Boris III in August 1943. 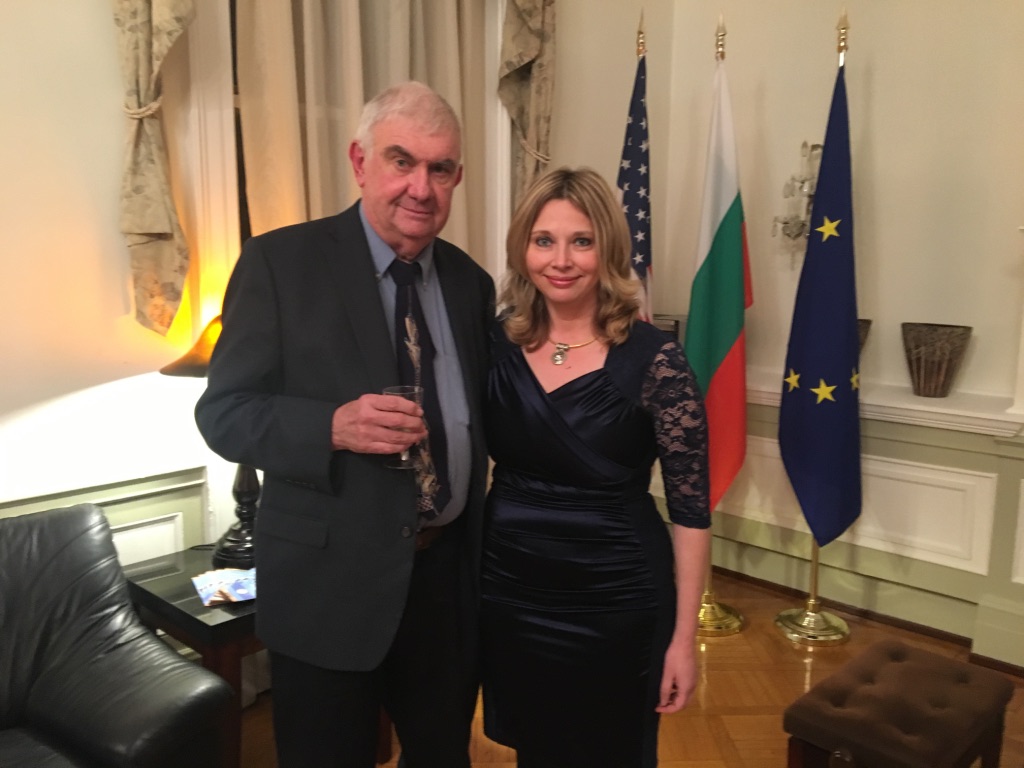 Prof. Kevin Clinton, co-founder and co-president of ARCS, shared the story behind the creation of ARCS and highlighted its mission as preserving Bulgaria's cultural heritage and building bridges between the academic communities of North America and Southeast Europe. The next speaker, Dr. Dimitrova Clinton, emphasized the second major aspect of ARCS's mission: promoting a democratic dialog and supporting publications that significantly contribute to our historical knowledge. She discussed the publication of Allied Deliberations from the inception of the idea to its actual publication and premiere at the National Cultural Palace in Sofia on October 4under the patronage of the President of the Republic of Bulgaria, Mr. Rosen Plevneliev. Dr. Clinton expressed her appreciation to Mr. Lachezar Toshev, author of a fascinating historical article in the volume, who provided impetus for collecting the archives; to Dr. Rebecca Seifried, copy editor of the final version of the text; and most of all to the volume's author, Dr. Alfred Beck, former Chief Editor of the U.S. Air Force History Program, who dedicated several years of painstaking efforts and expert research to the enterprise. Dr. Clinton also introduced Dr. Frank Schubert, former Chief of the Joint Operational History Branch, who in turn presented the accomplishments of the other academic speakers: the author Dr. Alfred Beck, who discussed the process of complication and publication of the volume, the contribution it makes for posterity, and its significance in the quest for truthful knowledge; and Professor Dennis Deletant, member of the Center for Eurasian, Russian and East European Studies at Georgetown University, who spoke about British clandestine activities in Romania during WWII and discussed the differences and similarities between Romanian and Bulgarian participation in the war. His talk was followed by an interesting discussion of various questions from the audience. The scholarly tone of the event was nicely supplemented by a musical interlude. The audience was mesmerized by the beautiful performance by world-renowned Bulgarian-American pianist Ani Gogova, who played Three Preludes for Piano by Svetoslav Obretenov and two études by Frederic Chopin. The evening concluded with a reception featuring Bulgarian wine and hors d'oeuvres crafted by the Balkanik Taste Food Truck. Once more, the American Research Center in Sofia would like to thank the Bulgarian Embassy in Washington for its warm hospitality, Dr. Ani Gogova for illuminating the evening with her wonderful music, the lecturers for their fascinating talks, and all the guests for joining us in celebrating Bulgarian history and Bulgarian-American friendship.

We would like to express our sincerest gratitude to the Bulgarian International Television for broadcasting the event and for its ongoing interest in ARCS’s academic and cultural activities. You can watch the broadcast of the events on BIT television below.