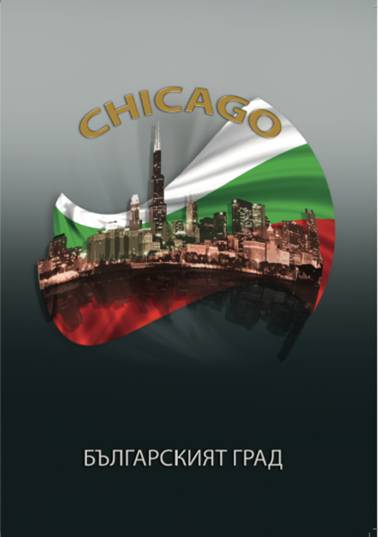 The American Research Center in Sofia is pleased to announce the upcoming presentation in Chicago of the first volume of the trilogy "Chicago-The Bulgarian City". The book is published with the patronage of the Consul General of the Republic of Bulgaria Simeon Stoilov. The volume describes the past and present of the Bulgarian immigration community in Chicago since 1848. This publication is a result of the efforts of the Bulgarian-American Legacy, a non-profit organization, established and managed Chicago by Dean and Vili Dinev. The coordinator of the book project and one of the authors in the volume is the renowned Bulgarian journalist Kliment Velichkov.

The book project started with the idea to commemorate the 120 anniversary (2013) of the World's Columbian Exposition in Chicago (1893) and to celebrate the book by the Bulgarian writer Aleko Konstantinov “To Chicago and Back” which was written on the occasion of the Columbian Fair. Aleko Konstantinov inspired many Bulgarians to arrive in Chicago and explore the city, and his description of Niagara Falls, on his way to Chicago, became a Classic piece in Bulgarian literature. Nowadays Chicago boasts the largest Bulgarian population abroad and this comprehensive new publication reflects the history of the Bulgarian immigration, the contributions of the Bulgarian community and individuals for the development of the Bulgarian diaspora and its integration into American society and for the strengthening of Bulgarian-American ties.

Sponsors and contributors to the project are various Bulgarian and American individuals and businesses from Chicago and the near vicinities: http://www.balegacy.org/project-chicago-the-bulgarian-city/. The American Research Center in Sofia is also one of the proud contributors to the volume and wishes success to the book!

The first volume of the trilogy "Chicago-The Bulgarian City" will be presented to the American and Bulgarian audience on October 30, Thursday at the Field Museum in Chicago (1400 South Lake Shore Dr., Chicago, IL 60605) at 7 pm.