Dr. Andrew Bernstein’s Book Premiere, Paired with a Piano Recital by Dr. Ani Gogova, Enlightened its Diverse Audience on the New Meaning of Heroism in our Day and Age 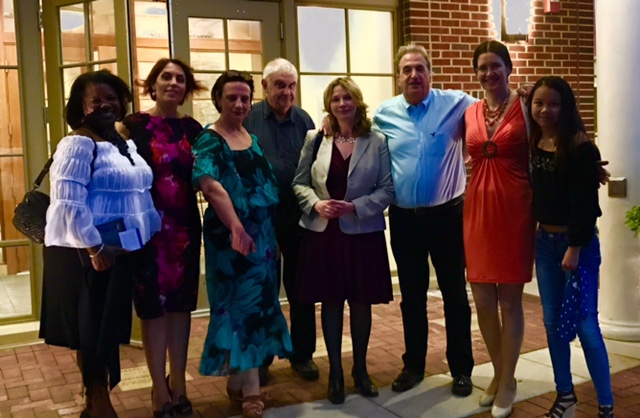 The event was hosted by the American Research Center in Bulgaria, Inc. (ARCB) on June 29th in the Stacy Sherwood Community Center in Fairfax, Virginia. ARCB is a nonprofit organization, registered in Virginia, which holds educational and cultural events in the DC area and other major American cities. It works in partnership with the American Research Center in Sofia Foundation (ARCS), which has supported hundreds of fellows and over 20 publications since its inception in 2005, to promote research cooperation between North America and Southeast Europe and to encourage an open academic dialog and appreciation of democratic values. Attendees of different age groups and parts of the world gathered to enjoy an evening of reading, music, and a lively discussion, inspired by a glass of fine wine and select hors d’oeuvres. The program was opened by Dr. Nora Dimitrova Clinton, co-founder and co-president of ARCS, who introduced the American philosopher Dr. Andrew Bernstein, his literary accomplishments and teaching achievements, and his passion for liberty and heroism. These are ideas that he further clarifies in his book, A Dearth of Eagles.

Following the writer’s introduction, Dr. Bernstein read a passage illustrating his protagonist, Kalin Baronov, “He was a freedom fighter by choice—but a writer by birth. He had known since childhood what he would do… There were dozens of ways to commit suicide—surrendering one’s dream was one—and nobody’s years were countless.”

The novel is the second fiction publication and the fifth book overall by the author, exploring capitalism from a philosophical standpoint, contrasted with totalitarianism, and its impacts on morality within society. Taking place shortly before the collapse of the Soviet Union’s reign, the readers follow the life and mind of a young Bulgarian freedom fighter and his outer and inner conflict with society’s stigmas on the good of mankind.

Concluding the discussion on heroism, Dr. Dimitrova Clinton recited a few lines from the poem “If” by Rudyard Kipling, “If you can fill the unforgiving minute, With sixty seconds’ worth of distance run, Yours is the Earth and everything that’s in it, And—which is more—you’ll be a Man, my son!”

“I couldn’t stop staring at her hands!” said a member of the audience.

Throughout the last season, Gogova has been featured in performances at Carnegie Hall, the Kennedy Center, the Chicago Cultural Center, the Piano Forte Series in Chicago, and a tour of her new CD, Fantasies, Fairytales, and Nightmares. Additionally, the talented pianist’s chamber music performances have been also been featured on NPR, Bulgarian National Radio, WFMT Chicago, TED Talks, and have been selected as Critics’ Pick by Time Out Chicago Magazine. Coming to the United States in 2001, she completed her doctorate of Musical Arts at the University of Michigan, Ann Harbor. By becoming the youngest professor to join the faculty of the Musical Conservatory, Gogova has since made it her life’s work to teaching young pianists from all over the world.

At the community center, the event concluded with a book and a CD signing by the two artists. Many attendees walked away that night with one, the other, or both, but also a new sense of interchangeable thought. Aided by the empathy evoked in Gogova’s music, Bernstein’s book brought into question our own ideas of heroism, morality, and what good they could bring. Not just to our everyday life, but to our world.

Judith Fortunova-Russell is an intern and research associate at the American Research Center in Bulgaria. In addition to her research at ARCB, she studies Journalism, French, and International Studies at St. John's University in Queens, New York. One day, she hopes to be a journalist and to transcend the message of injustice, different cultural and religious perspectives, and broader tolerance throughout the world.