Conceived and developed over the course of 2011 by Denver Graninger (ARCS Director, 2010-2012) and Emil Nankov (ARCS Archaeology Program Officer), ARCS launched its first archaeological field school at the site of Heraclea Sintica, near Petrich in July 2012. For the purposes of the project, ARCS  collaborated with Lyudmil Vagalinski and his team from the National Archaeological Institute with a Museum, BAS (the excavation permit holder) and Sotir Ivanov from the Museum of History in Petrich (on the territory of which Heraclea Sintica is located), in order to secure an archaeological site for the student training. In February 2012 we were very fortunate to receive a two-year grant from the America for Bulgaria Foundation to set up and sustain the Field School in its ‘toddler years’. 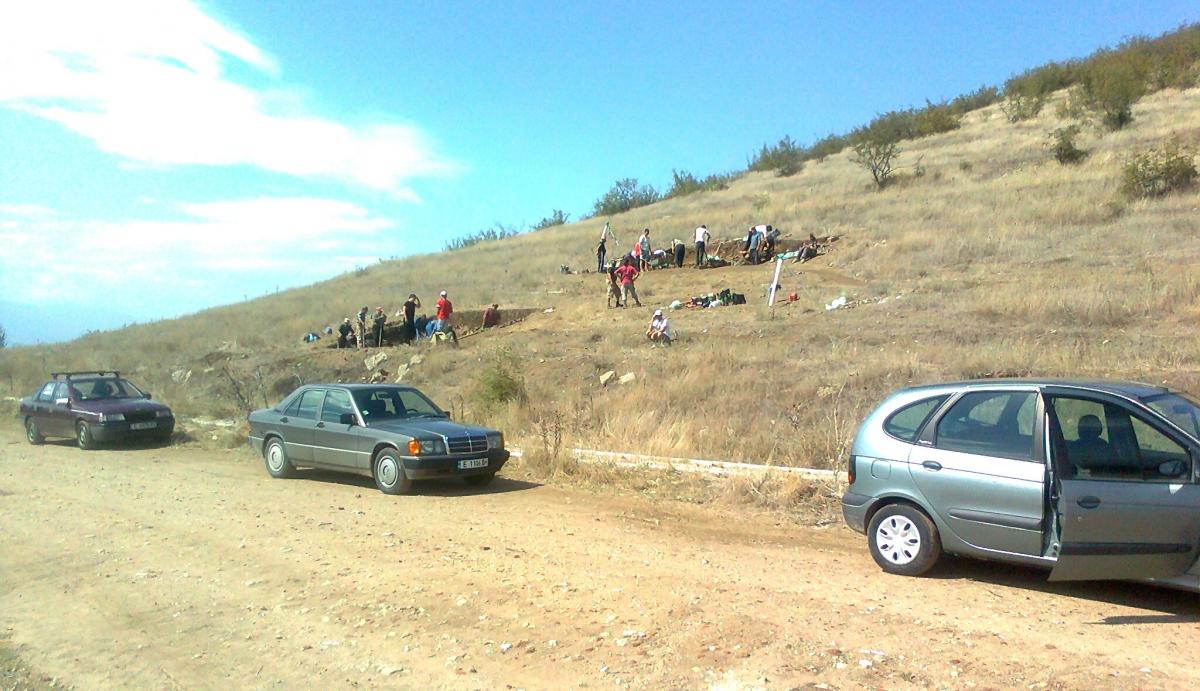 While the ARCS program, designed by Nankov, was heavily focused on instruction in fieldwork methodology, the Field School also offered a series of lectures on scientific and non-destructive methods in archaeology and thematic sections about Bulgarian archaeology, supplemented with three field trips in Republic of Macedonia (Stobi, Strumica), Greece (Thessaloniki, Philipi and Amphipolis) and SW Bulgaria (Melnik, Sandanski, Blagoevgrad). All students produced final reports summarizing the excavation results. We were very fortunate to have Prof. Hallie Franks from New York University in the team during 2012, 2013 and 2014, as a Guest Lecturer. Over the three excavation seasons at Heraclea Sintica, ARCS trained 34 undergraduate students coming from Classics, History and Archaeology programs based in the US. In summer of 2013 ARCS augmented the fieldwork experience with a week-long study trip prior to the excavations devoted to introducing the students to select archaeological sites in Bulgaria. 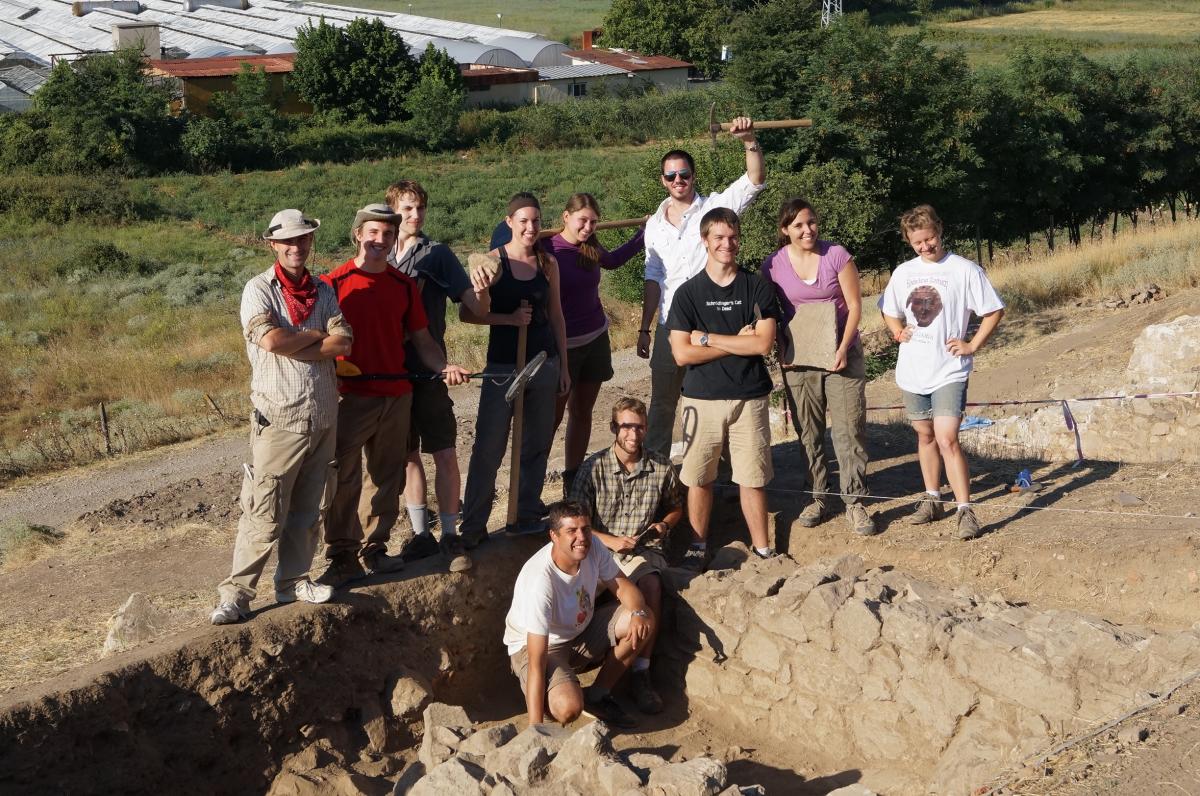 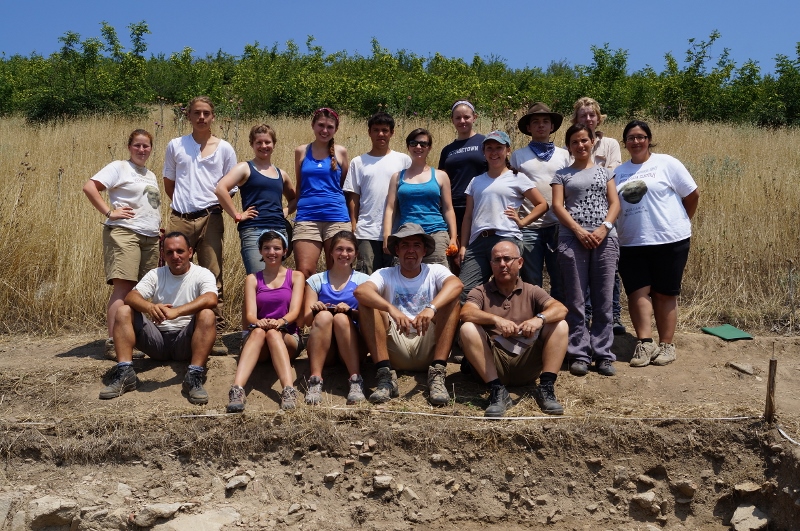 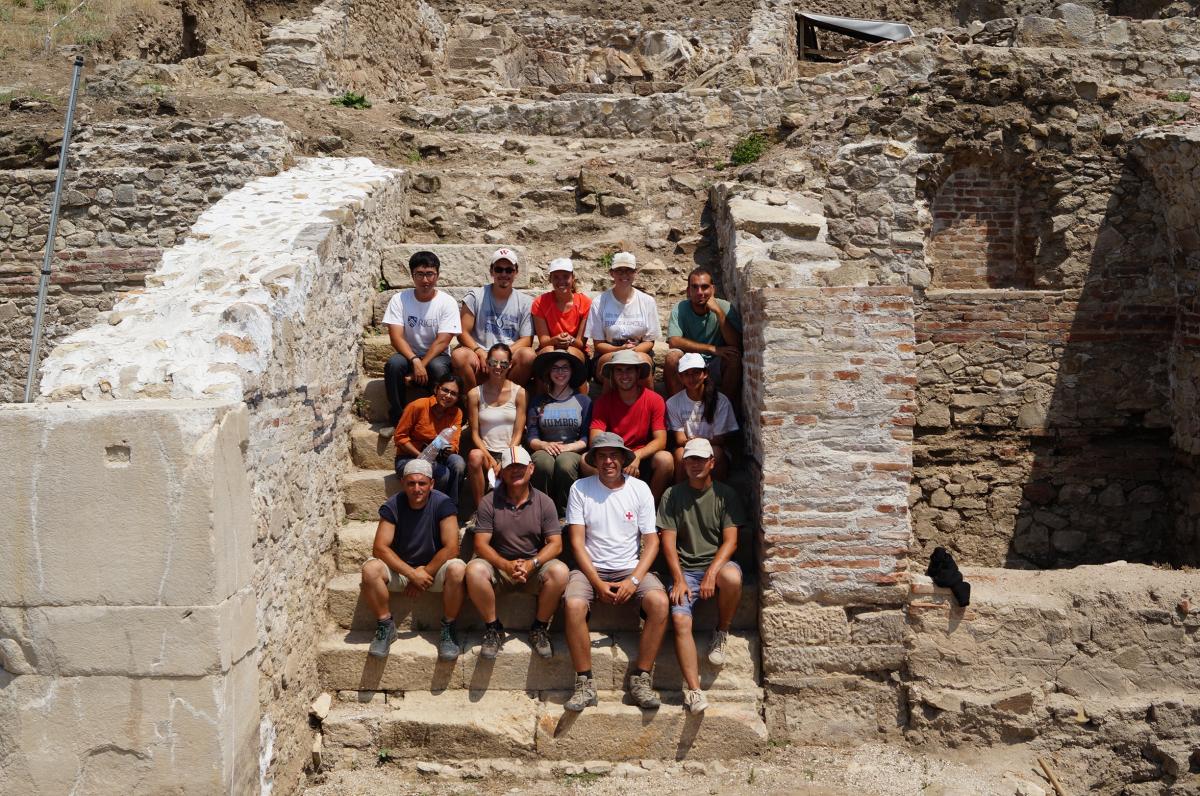 After three consecutive seasons at Heraclea Sintica (2012-2014), the program moved to a new home: the Roman town of Parthicopolis located underneath the modern town of Sandanski on the left bank of the Strymon River, just 15 km northeast across from Heraclea Sintica, as the crow flies. In the summers of 2015 and 2016 ARCS hosted seven undergraduate and graduate students from the USA and three graduate students from Bulgaria. The program included a 5-day pre-excavation trip, whereby ARCS led students on tours of archaeological sites and museums in southern Bulgaria and northern Greece, and a three-week fieldwork on the site. The excavations, which were conducted in collaboration with  Vladimir Petkov from the Archaeological Museum in Sandanski, took place in the atrium of the Bishop’s basilica at Parthicopolis dated to AD 300-600, where a splendid array of finds, including coins, metal tools, whole pottery vessels, among others, revealed the existence of a public building of unknown function which existed before the construction of the basilica. Currently ARCS advertizes for its 2016 season (http://arcsofia.org/node/75). 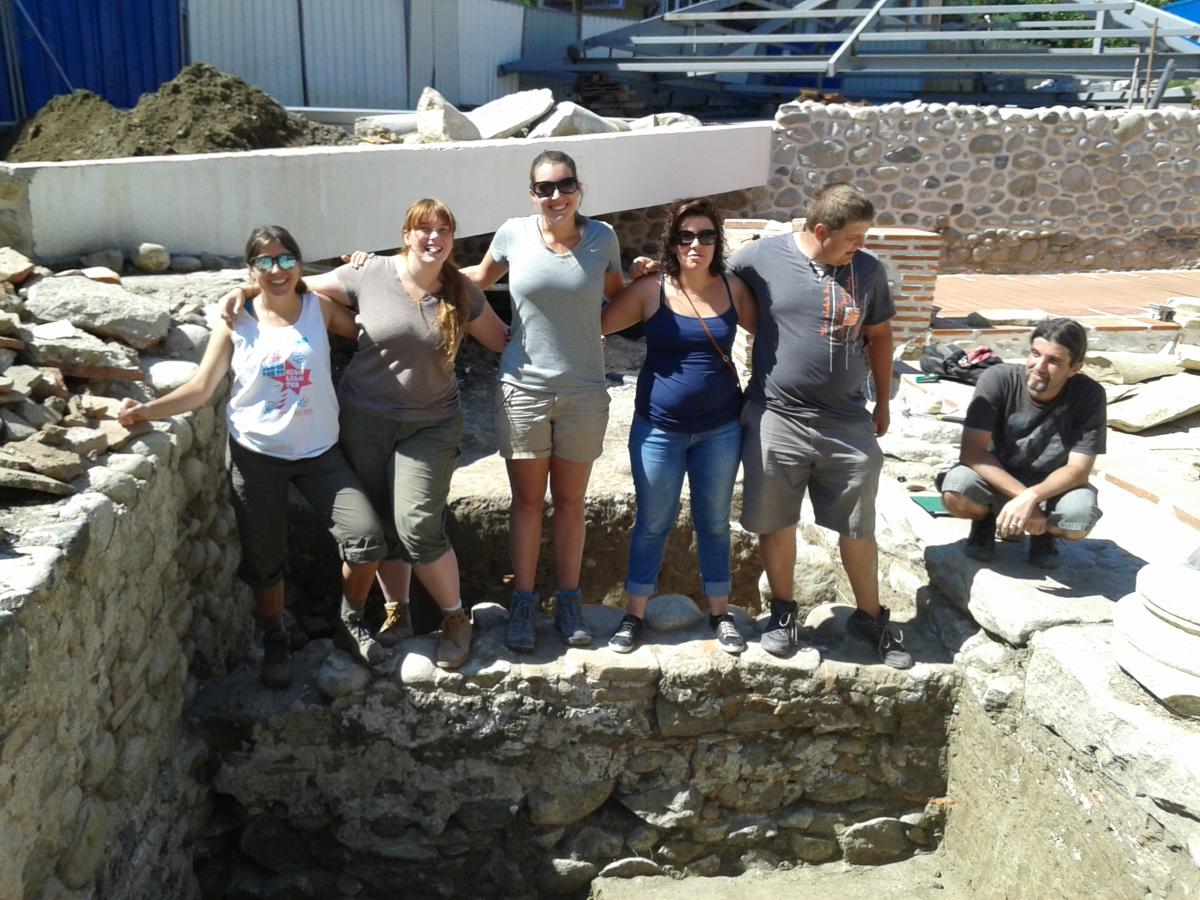 As spin-offs from the Field School program, at the instigation of Nankov, ARCS collaborated twice with the National Archaeological Institute with a Museum, BAS and the Museum of History in Petrich in 2013 and with the Archaeological Museum in Sandanski in 2015 by organizing two international conferences in order to make the archaeology of the region more visible and accessible to non-Bulgarian scholarship. The conferences, which took place on September 19-21, 2013 in Petrich (http://arcsofia.org/node/385) and on September 17-20, 2015 in Sandanski (http://arcsofia.org/node/538), brought together over 50 scholars from Bulgaria, Republic of Macedonia, Greece, Russia, Austria and USA to present their latest research on the archaeology and history of the Middle Strymon Valley, with a heavy emphasis on the recent excavations at Heraclea Sintica and Parthicopolis. 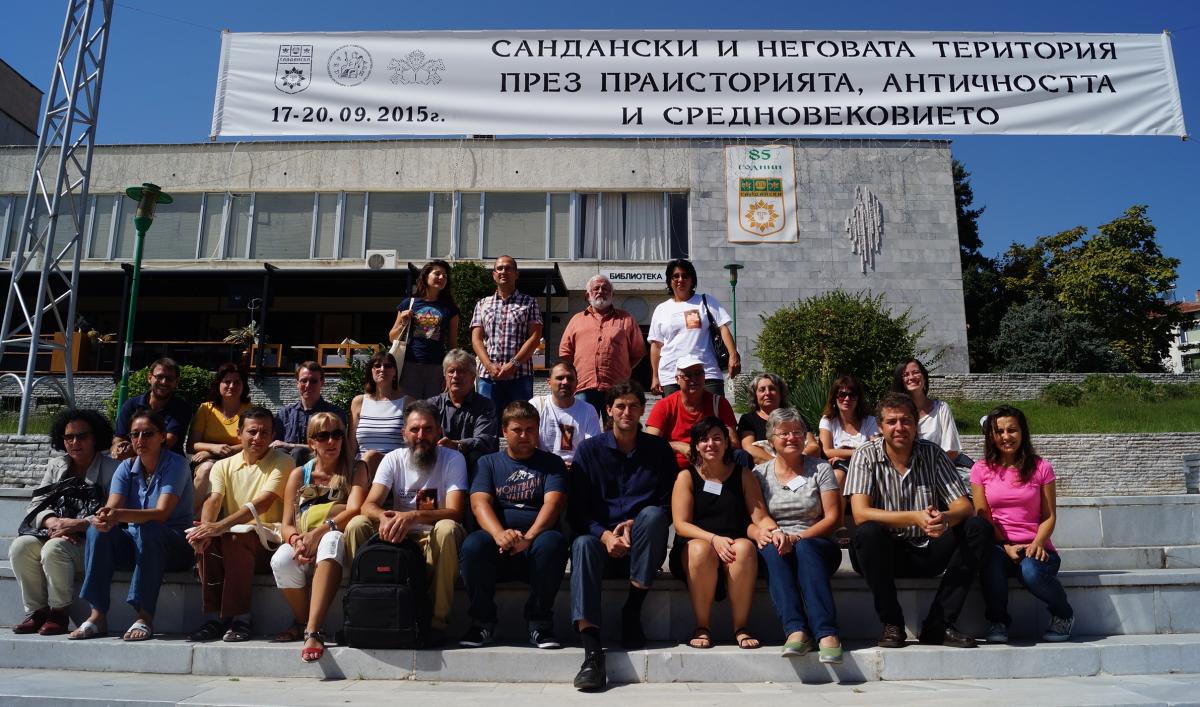 The proceedings from the Heraclea Sintica conference, Heraclea Sintica: from Hellenistic Polis to Roman Civitas (4th c. BC-6th c. AD), edited by Vagalinski and Nankov, were published in February 2015 as Volume 2 of the Papers of the American Research Center in Sofia (http://arcsofia.org/node/505). The papers from the conference, Sandanski and Its Territory during Prehistory, Antiquity and Middle Ages: Current Trends in Archaeological Research, edited by Nankov, was published as volume 3 of the PARCS in 2017 (http://arcsofia.org/node/654).